The Navitimer from Breitling is turning 70! Originally conceived as a tool watch with which pilots could still perform flight calculations using a completely analogue system, it has advanced over the years and, since its time on the wrists of jazz great Miles Davis, filmmaker enfant terrible Serge Gainsbourg or racing legends Jim Clark and Graham Hill, evolved into a lifestyle timepiece. The new anniversary models are more fashionable than ever, with fresh colours, sizes for everyone, and the return of a familiar logo. 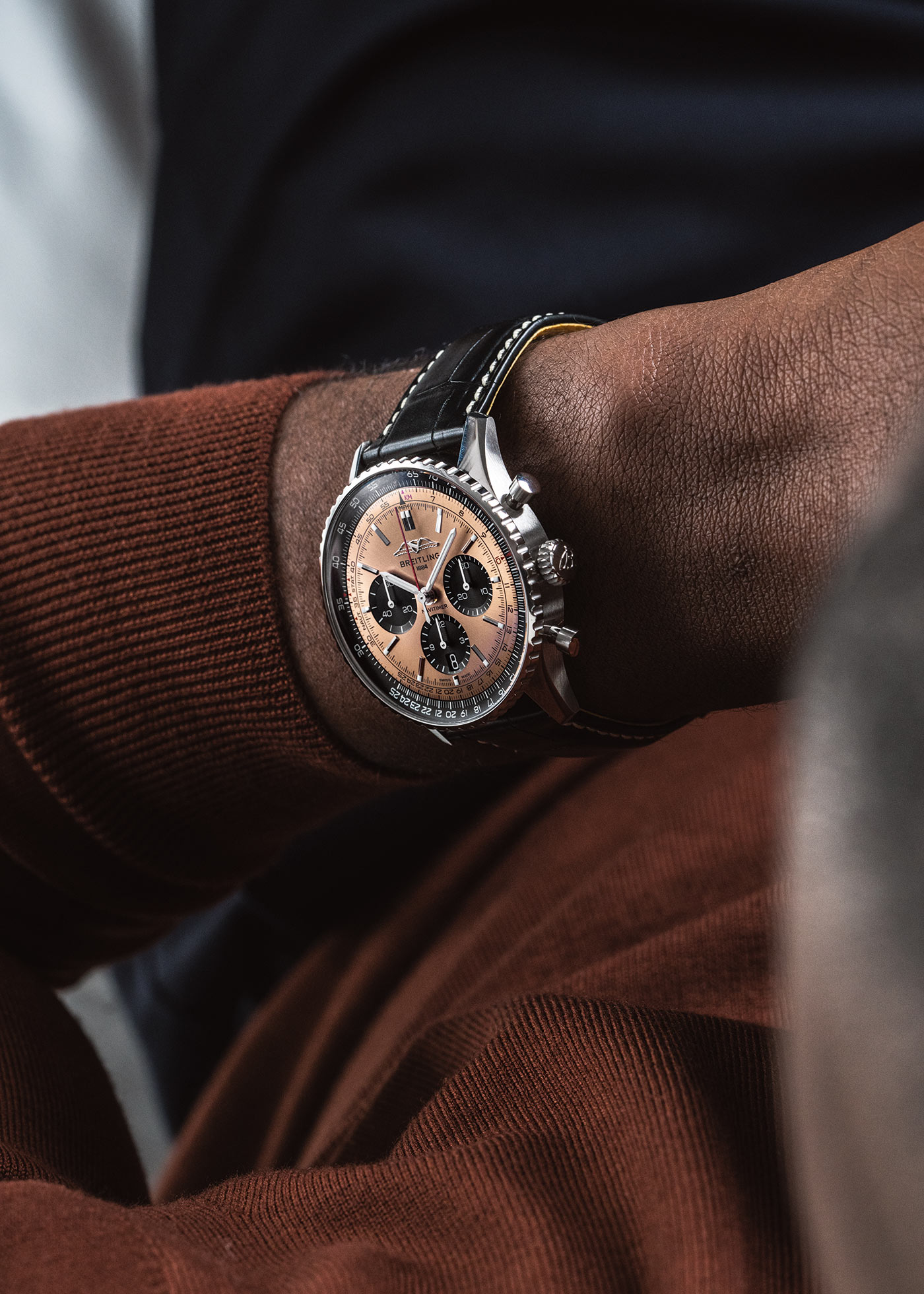 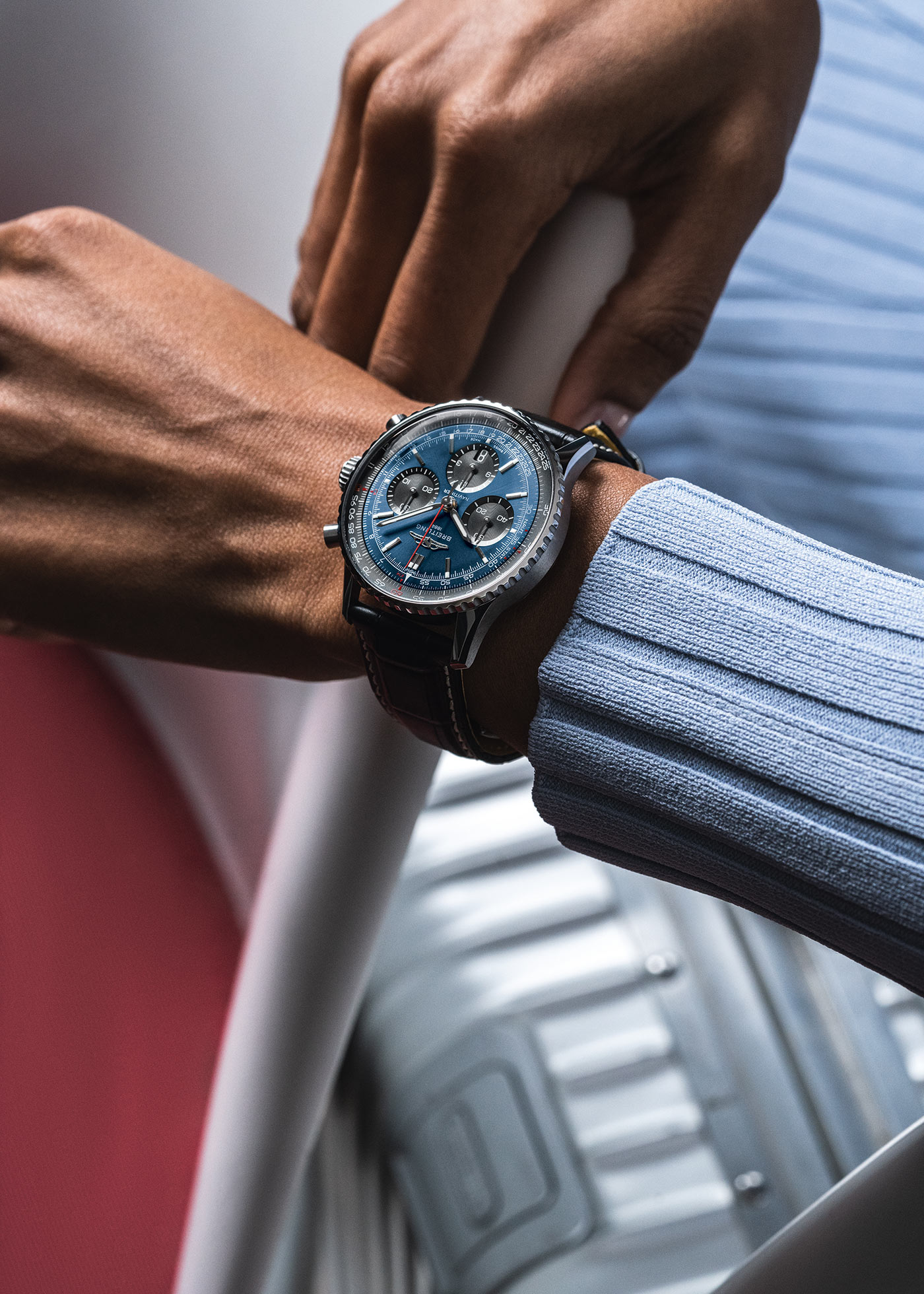 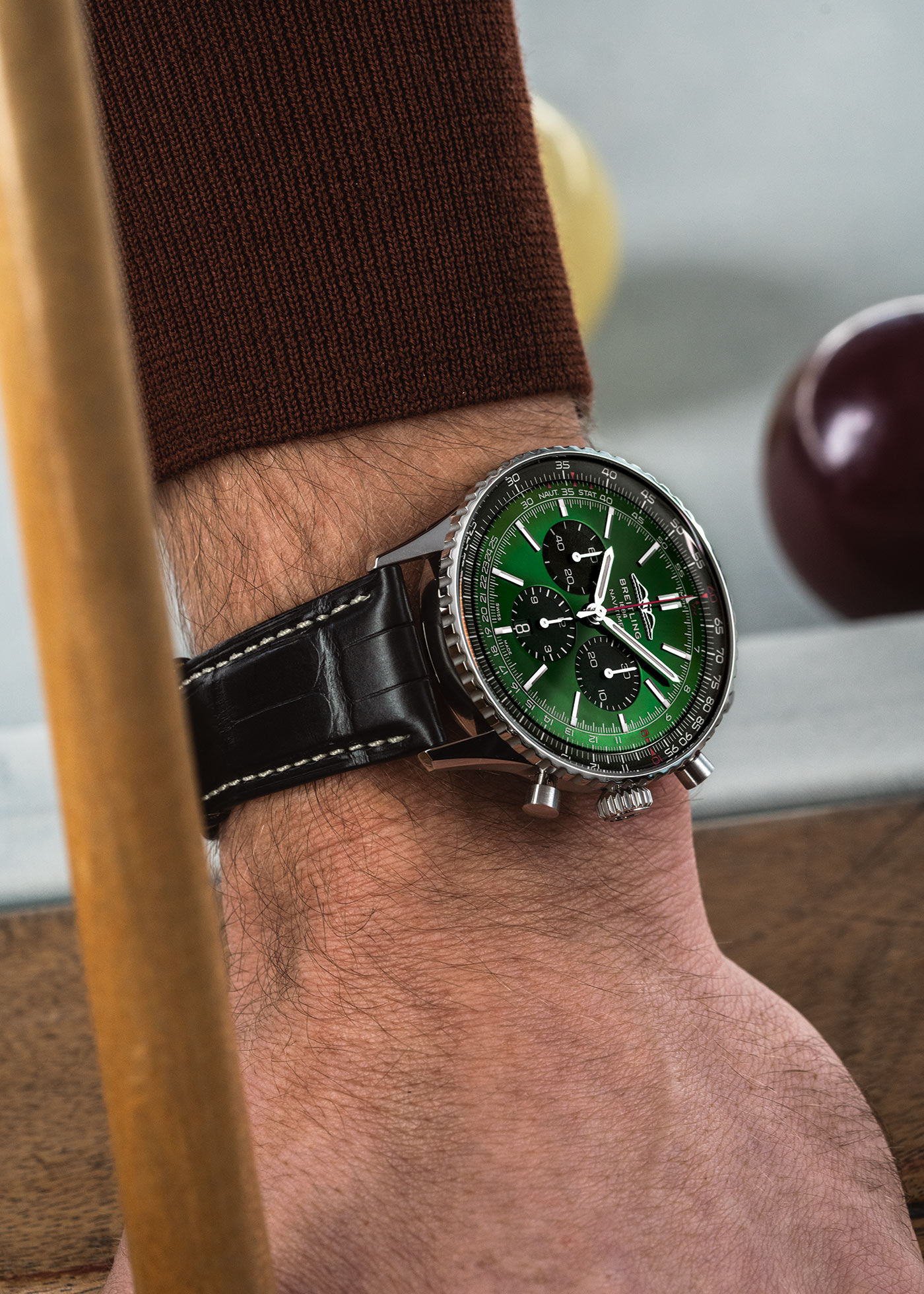 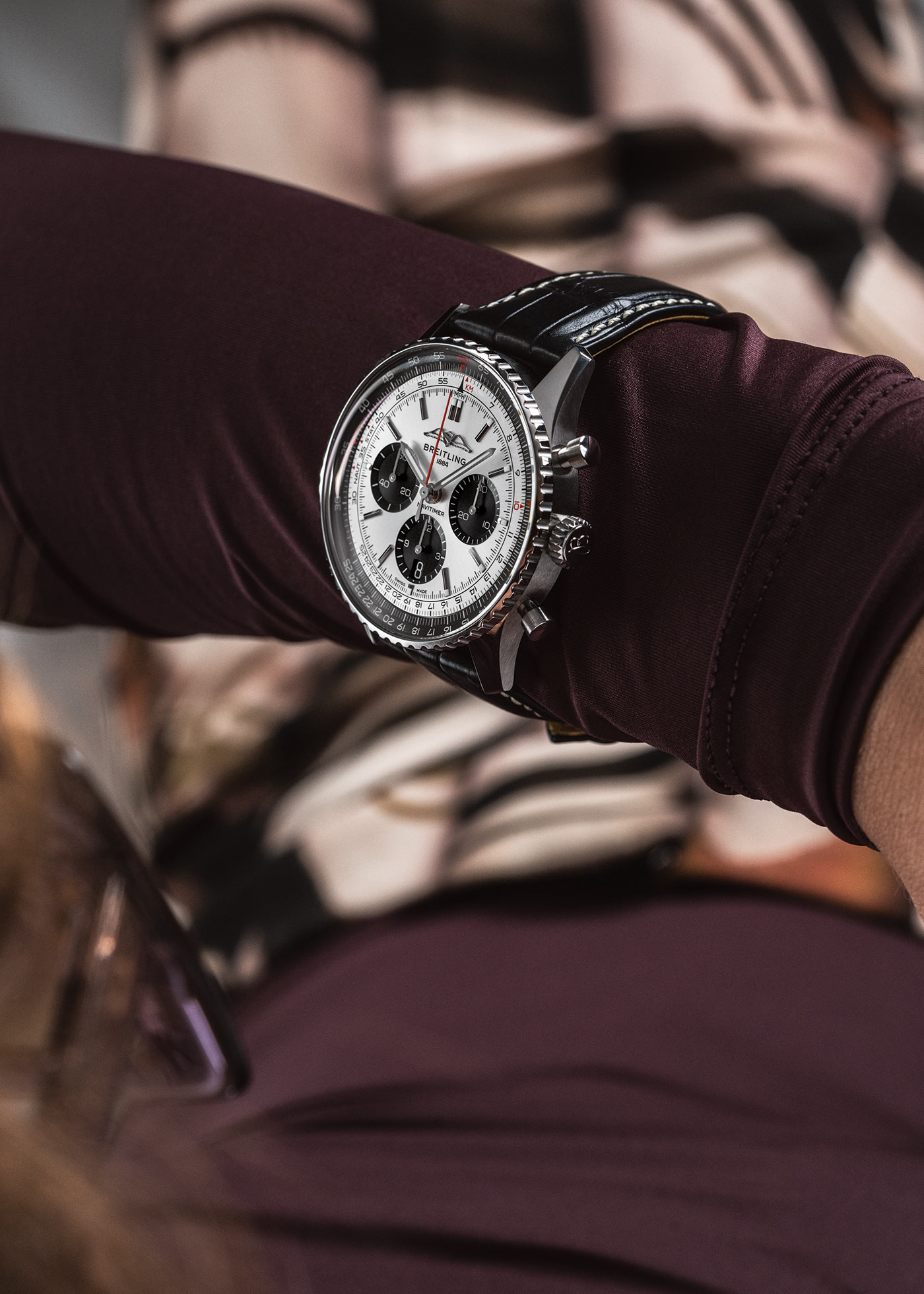 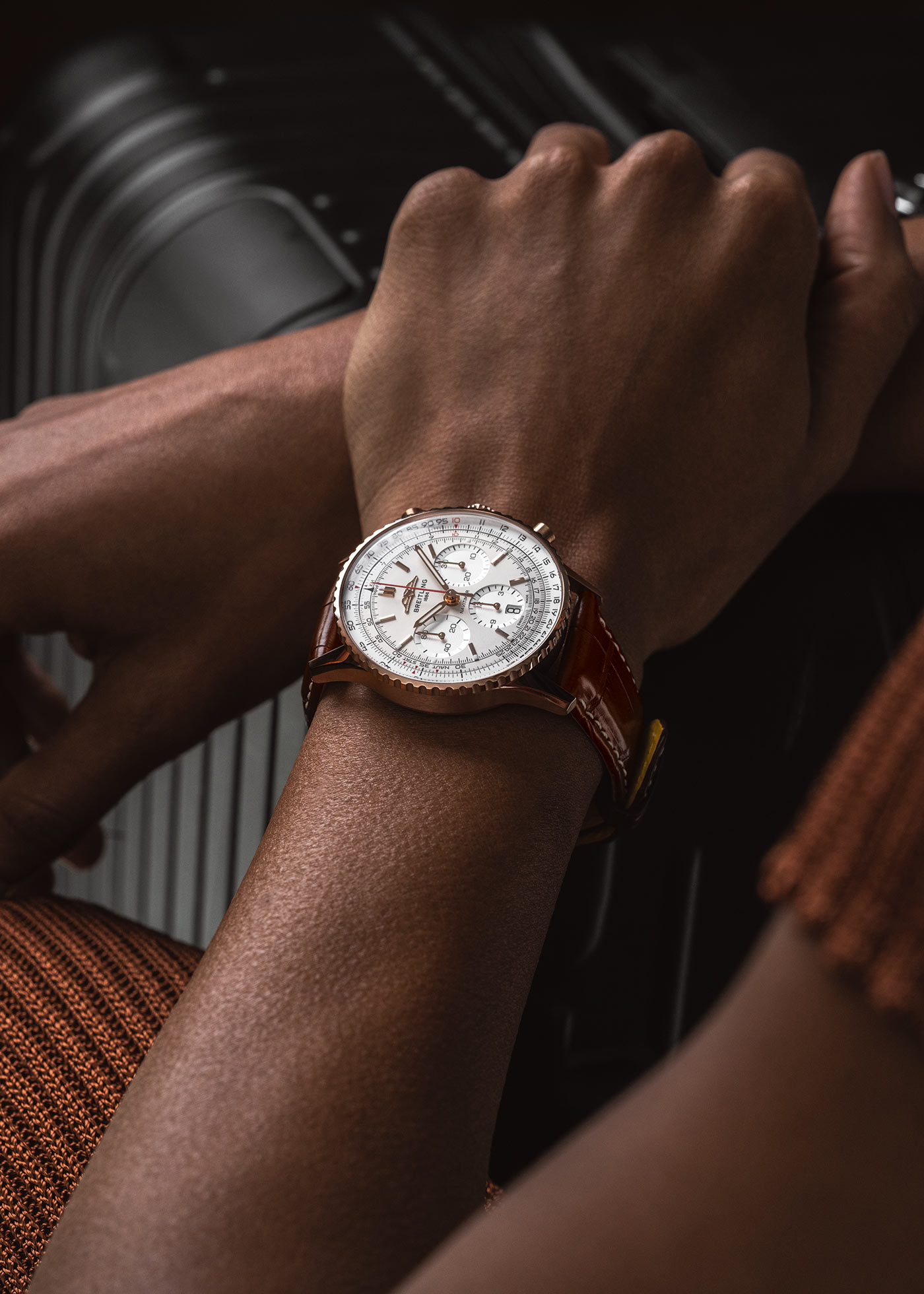 The beginnings of the Navitimer, on the other hand, were purely functional. When Willy Breitling designed it for the AOPA (Aircraft Owners and Pilots Association) in 1952, the idea was for pilots to use it to perform calculations on the average speed, distance travelled, fuel consumption and speed of ascent. The combination of navigation and timer becomes the Navitimer, so it has nothing at all to do with the “Navy”. but rather with navigating. The foundations of the design, with its unmistakable features, was already laid at that time and would hardly change to this day. The Navitimer was a distinctive chronograph with a circular slide rule, baton indexes and hands and the typical fluted bezel for a good grip when pilots operate the watch with their leather gloves.

Original Breitling Navitimer models from the 1950s with the AOPA logo

What a pilot club has to do with the Navitimer

The AOPA, (Aircraft Owners and Pilots Association) is considered the world’s largest pilot club. Founded in America in 1939, there are now representatives of the organisation in over 50 different countries. In 1954, the AOPA made the Navitimer its official timepiece. The AOPA wing logo appeared on the 12 o’clock position – Breitling’s company name was not to be found. The first batch of 100 watches was delivered in July 1954 exclusively for AOPA members. These Navitimer models did not yet have a reference number. Another tiny detail that distinguishes these 100 pieces from all upcoming Navitimer watches: the lugs were about 1 mm shorter. Therefore, the highly limited models from the first production series without the Breitling logo and reference are extremely sought after by collectors today.

In October 1955, there was a small batch of the Mk 1.3, which was still produced without Breitling lettering, but for the first time bore a reference number (806). It was the last model with the Valjoux 72 caliber. Then, at the end of 1955, Breitling started commercial production with the Reference 806 and Breitling lettering over a non-signed AOPA logo. Exclusive production for AOPA, i.e. without Breitling lettering, continued into the 1970s, producing several thousand models. From 1954 to 1955, Willy Breitling built the Valjoux calibre 72 into his Navitimers. This was followed by the Venus calibre 178 and then in 1969 by the calibre 11, the first automatic chronograph movement. Finally, since 2010, the completely in-house produced B01 has been used.

A statement watch – not just for pilots

With the rise of digital technologies, the Navitimer‘s usefulness as a tool watch gradually faded. But it remained THE statement watch of all among pilots, and Hollywood superstar John Travolta, as a passionate hobby pilot, embodied the pilot watch spirit of all aeronautics geeks in the early 2000s. But the Navitimer also found its way onto the wrists of musicians like Miles Davis or the French artist, actor and provocateur Serge Gainsbourg. Racing drivers Jim Clark and Graham Hill also fell for the Navitimer‘s charm. In 1962, even astronaut Scott Carpenter wore it on a space mission, resulting in the Special Edition Cosmonaut Navitimer Reference 809. It went from being a mechanical aid for pilots to a social statement watch (or commercial style icon).

It must definitely be noted that the Navitimer saw little to no change for many years. It even slipped at times into the milieu of ostentatious XXL watches with their oversized slide rule bezels. Then Georges Kern came along and breathed new life into it. After he took over as CEO in 2017, the company used familiar design codes, but at the same time modernized them moderately, thus carefully preparing Navitimer fans for a new era.

All new, yet unmistakable

Perhaps it is out of respect for this loyal fan base that Breitling is reintroducing the AOPA logo on the new Navitimer models to mark the 70th anniversary. Above the Breitling lettering, the winged logo of the flying club is emblazoned on the new models, with their diameters of 41, 43 and 46 mm.

But looking at the brand’s new campaign, it’s also clear that not too much remains of the pilot watch legend of yesteryear. Instead, the focus is on young, fashion-conscious cosmopolitans who integrate Breitling Navitimer watches into their everyday lives as a lifestyle product rather than a statement watch, let alone a tool watch. John Travolta has been replaced with young trendsetters who prefer to celebrate the latest fine dining in the world’s metropolises, rather than indulge in a somewhat outdated “above the clouds” romanticism equipped with leather jacket, aviator glasses and thumbs-up mentality. 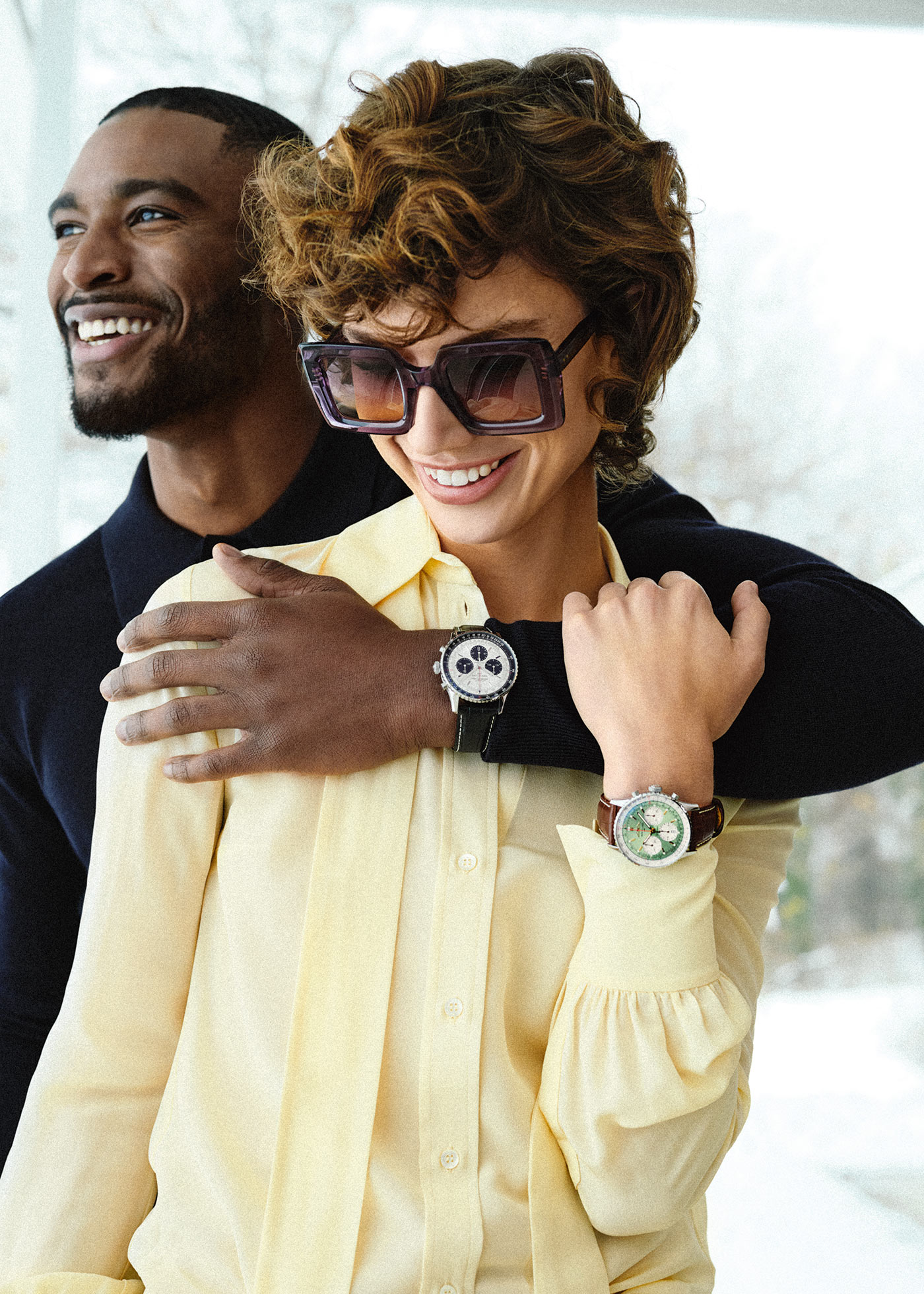 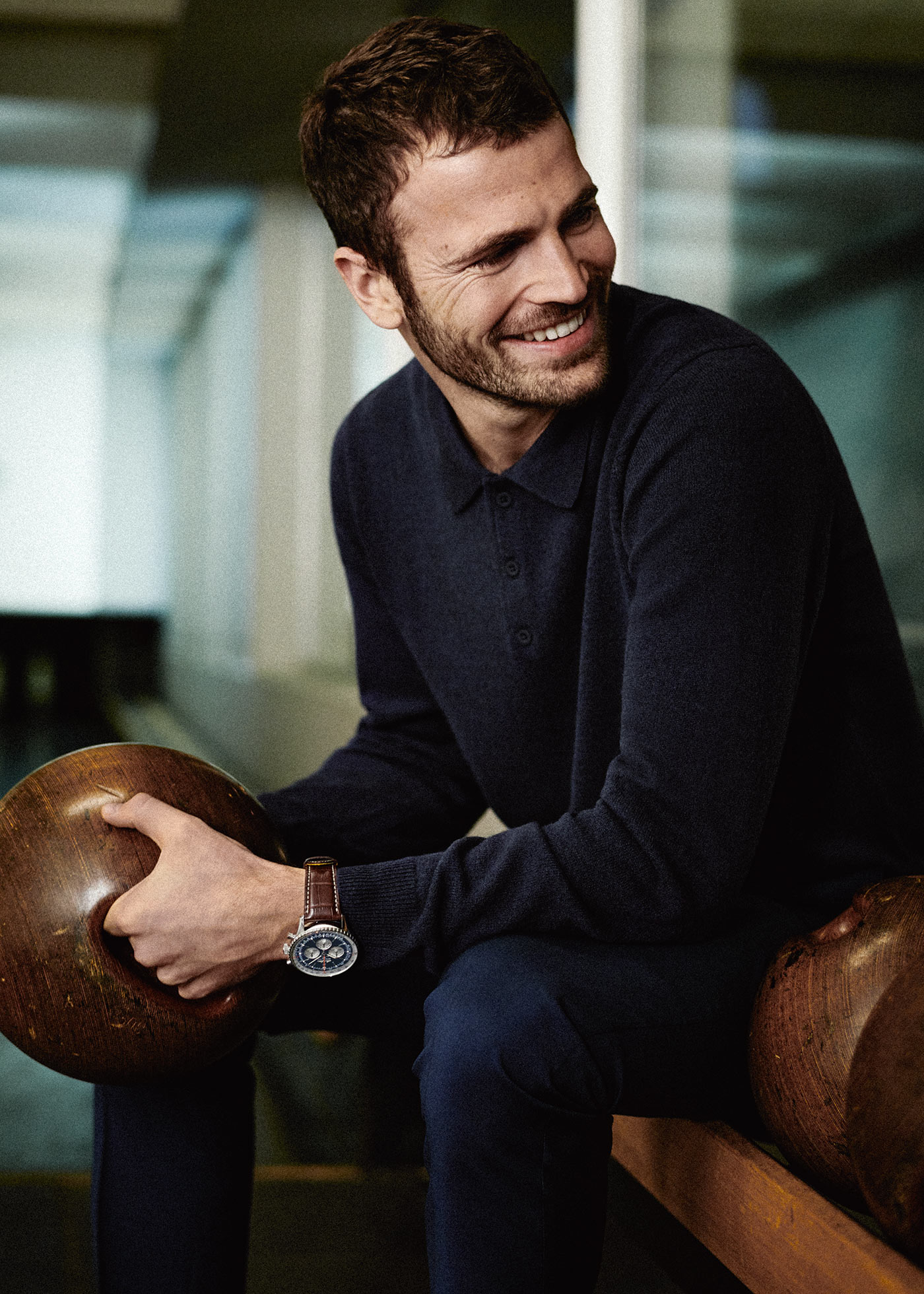 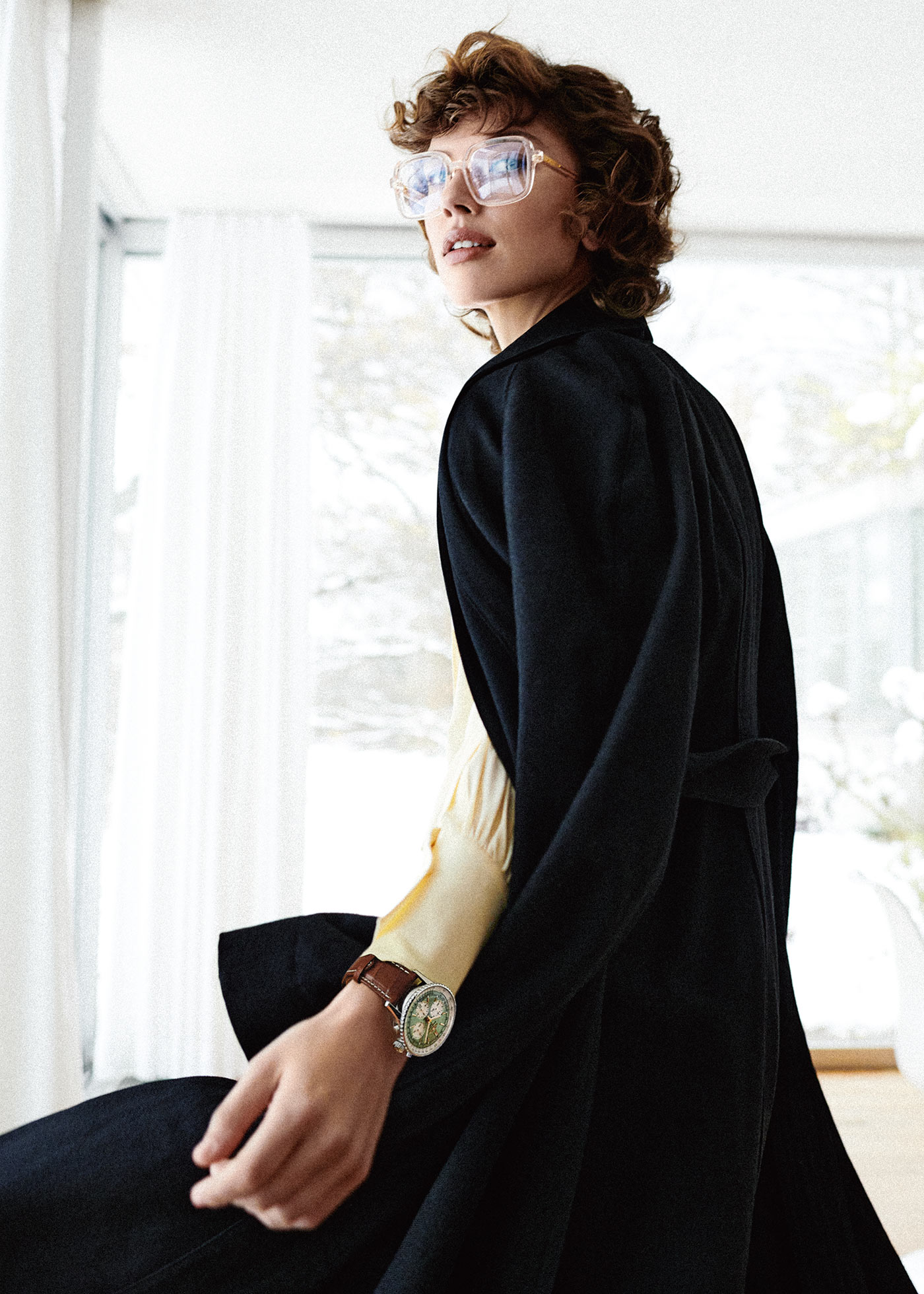 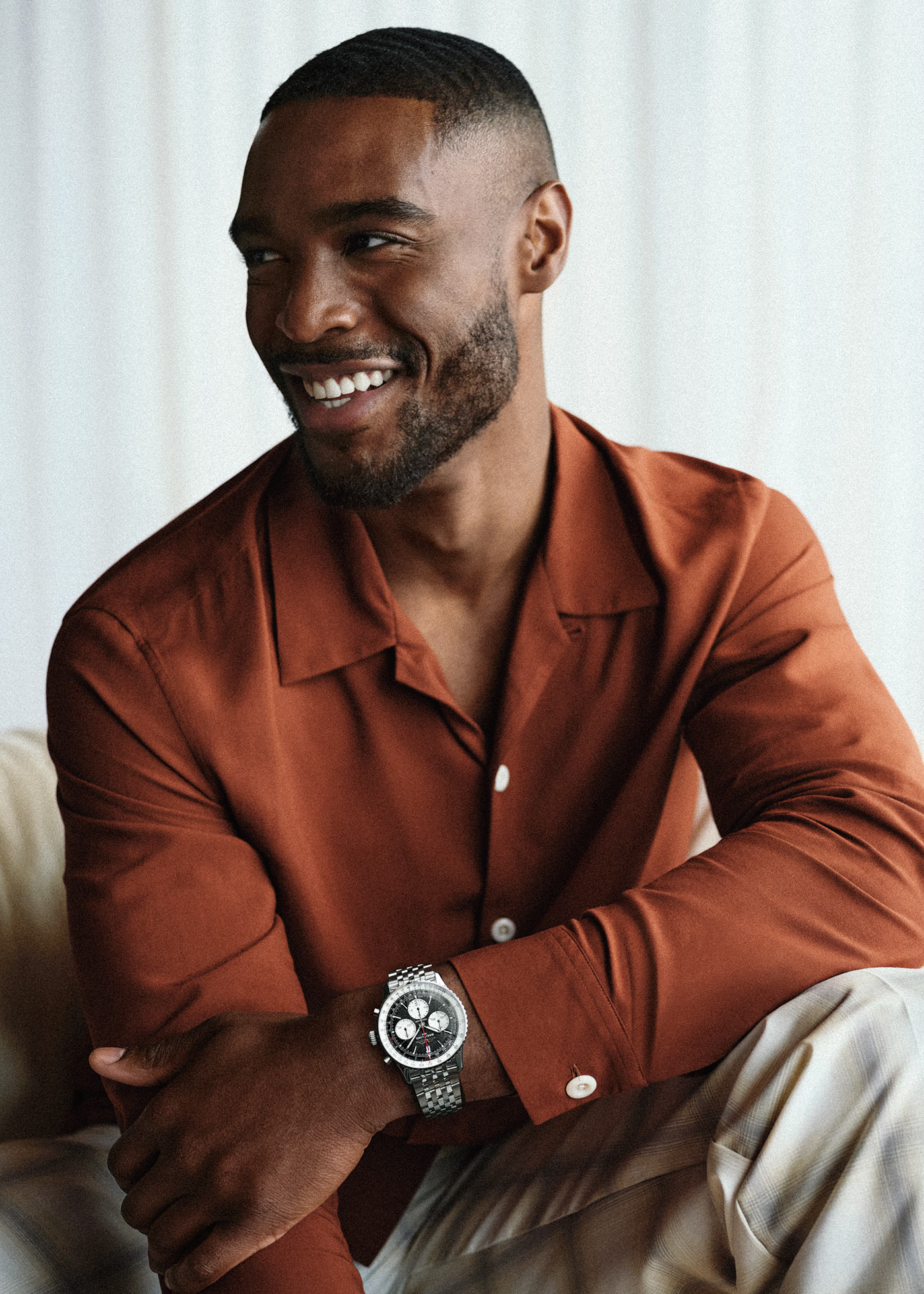 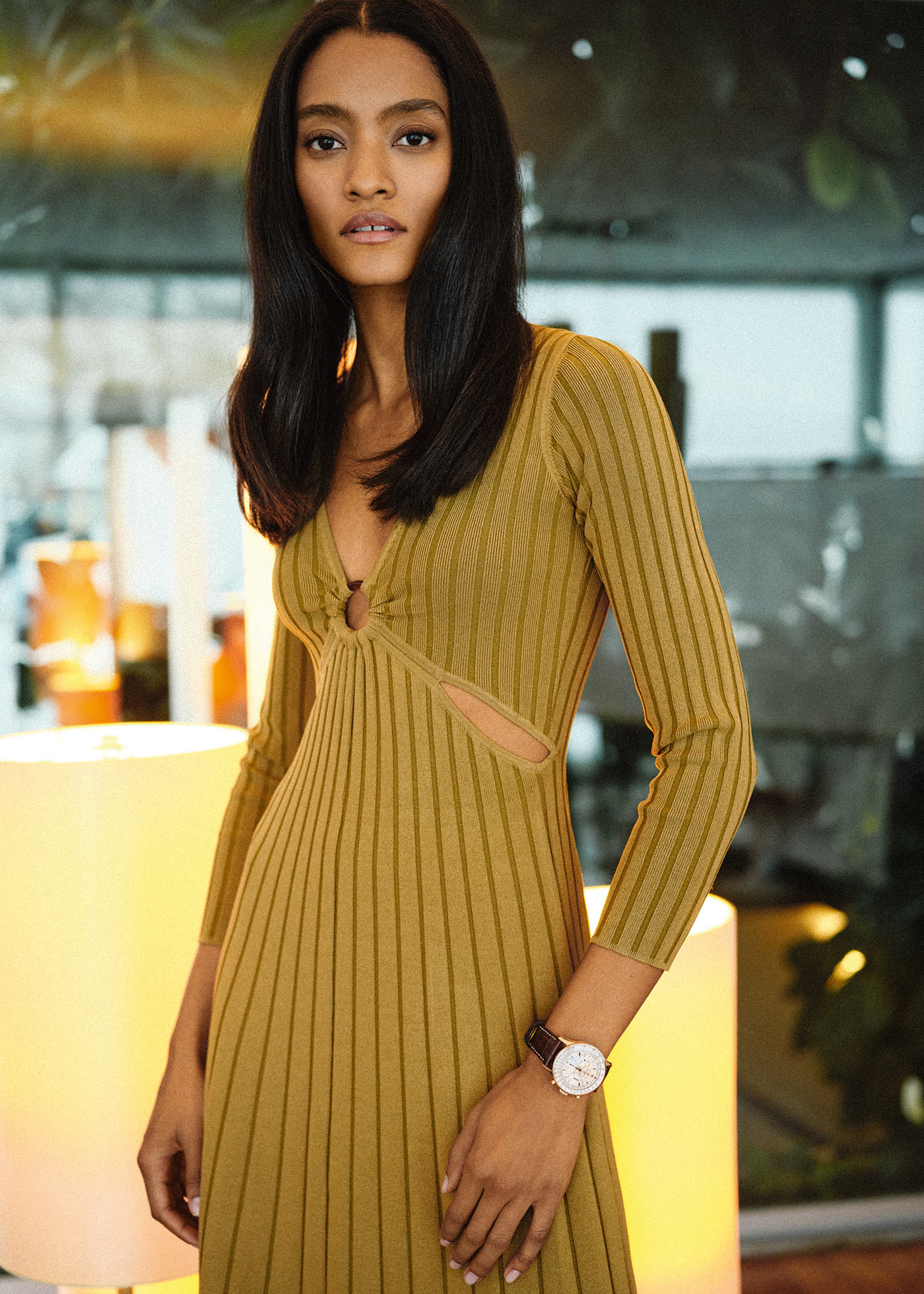 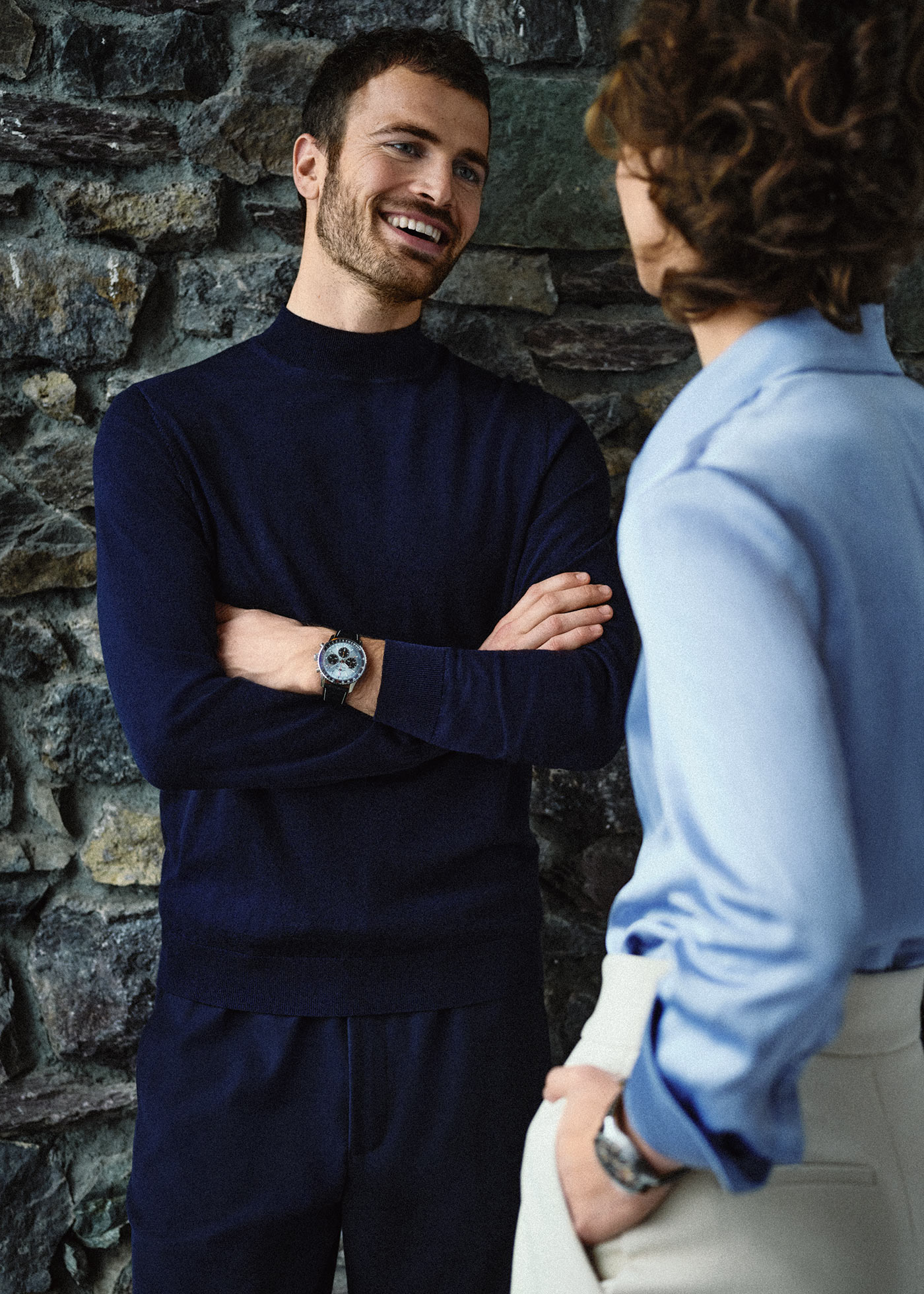 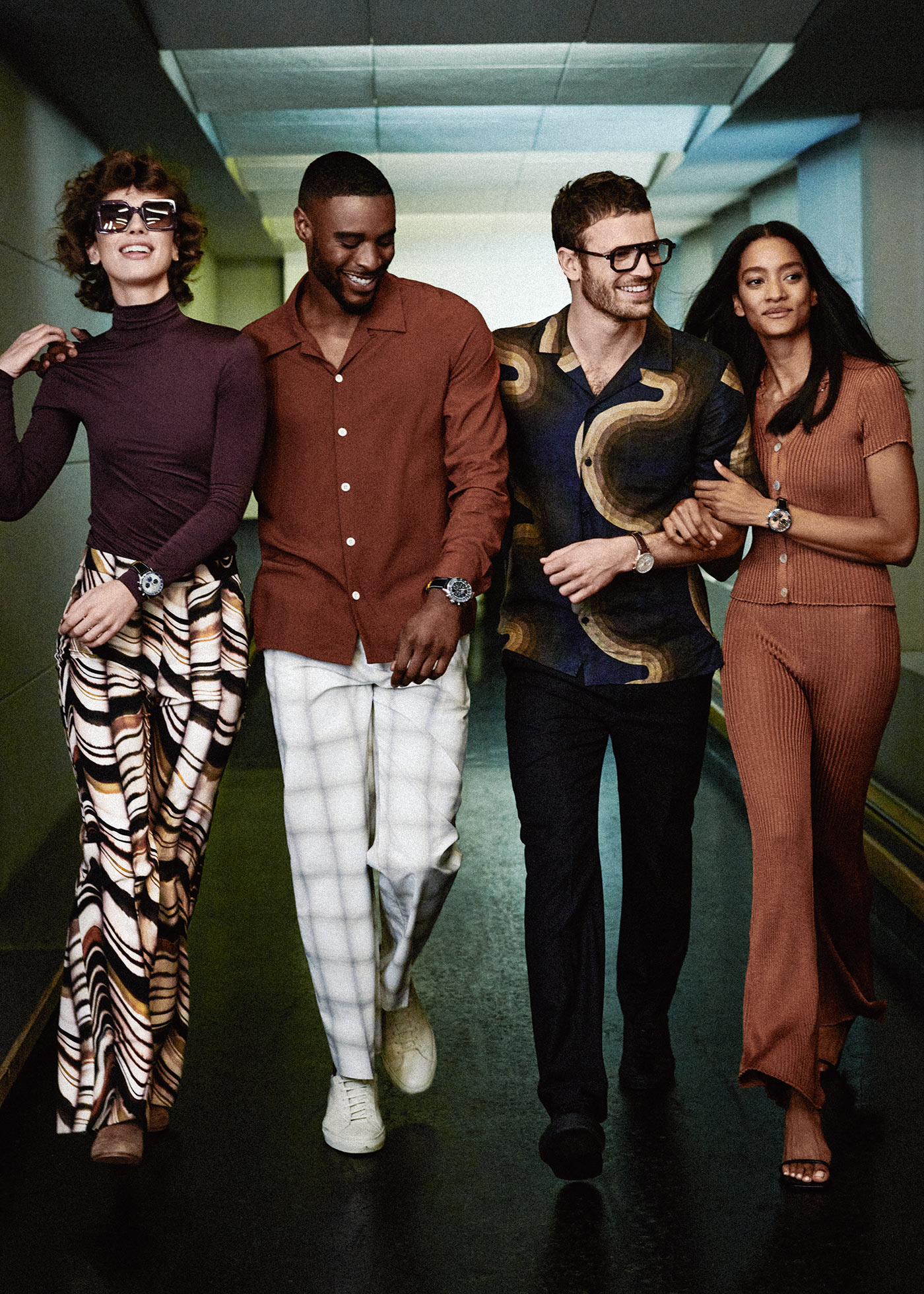 Strictly speaking, everything about the new models, except for the pushers, is in a new guise. Even the pushers have become minimally shorter, but the design is unchanged. The curved sapphire crystal is 1mm taller and is meant to mimic the “double-doom” look of the acrylic glasses from the old days, but overall, the case has decreased slightly from 14.2 mm to 13.69 mm. The case has been redesigned and the slide rule has been flattened a little, making the profile of the watch a bit more compact.

We see several fresh new dial colours including ice blue, mint green and more muted copper tones. In addition to stainless-steel models, Breitling now offers all-gold variations in 18-carat rose gold. While this is a novelty in terms of the evolution of Navitimers over the past few decades, all-gold Navitimers were already available in very limited numbers in the 1950s.

The new lifestyle placement of the Navitimer is also reflected in the size range. With 41 mm, 43 mm and 46 mm, there’s actually something for everyone. The colour variations within the sizes differ slightly. Stainless steel and leather straps are available in all sizes, as is solid gold.

The eternal question of the date position has been solved very well. Those who value a date function often don’t like it at the 3 or 4:30 (between 4 and 5) o’clock position. It is constantly a topic of controversy. Now, the date lies at 6 o’clock within the subdial counter and is so unobtrusive that anyone who doesn’t value a date can simply ignore it – and everyone else no longer has to be bothered by the position between 4 and 5 o’clock. They even took the trouble to match the date disc to the colour of the subdial counter. To some extent, the move can also be seen as a tribute to the early Navitimer models. From 1969, the first model with date at 6 o’clock appeared with Reference 1806. In 1972, the date window changed to the 4.30 o’clock position with Reference 7806, and in 1989 to 3 o’clock with Reference 81610. So now, we make a return back to 6 o’clock.

And then, of course, there’s the matter of the logo. For the anniversary, the AOPA logo reappears on the Navitimer for the first time with Breitling lettering, as on the commercial models from 1955 onwards. On the 41 and 43 mm models, Breitling places the Navitimer lettering below the dial, and on the 46 mm models, above. As early as last year, Georges Kern revived its collaboration with AOPA and gave a pilot training scholarship to an applicant via a job posting. According to the company, 1,753 applications were received. So there is still a touch of aviation romance in Kern and his team.

Breitling has been using its in-house produced calibre B01 in its Navitimer models since 2010. The latest generation of the B01 ticks in the new anniversary models, with new finishes and a slimmer silhouette of the oscillating weight, which the wearer can admire through the open sapphire crystal caseback. The COSC-certified movement has a power reserve of 70 hours and comes with a five-year warranty.

George Kern and his team have once again shown their flair for teasing the full potential out of a brand with so much history and a model thought to be aging like the Navitimer. After causing a brief moment of terror among loyal Breitling fans and connoisseurs in 2018 with the Navitimer 8, they are now back on the right track (or runway).

The collection is more versatile than ever, which will attract new clientele and won’t cause upset to existing ones. It remains to be seen how the exciting new dial colours will be received and which models will be the bestsellers. 70 years of Navitimer – and it still looks as fresh as a daisy. Happy Birthday!